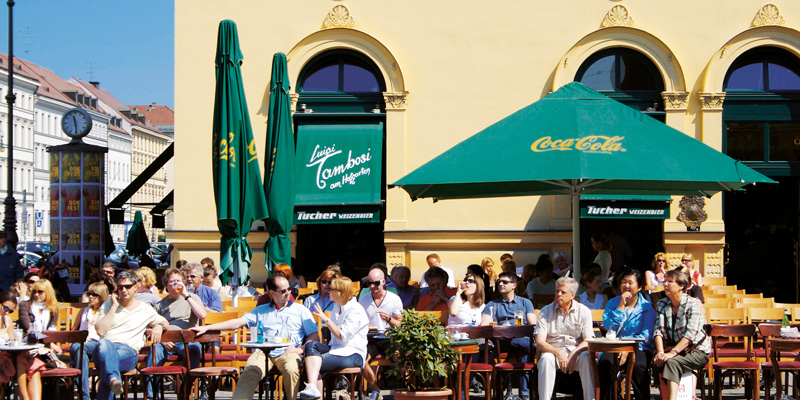 When it comes to coffeehouses Munich can barely compare to Vienna, but for all that, one can´t imagine "Italy´s northernmost city" without coffee. One of Munich people´s attitudes towards life is to stream outside armed with sun glasses as soon as the least evidence for nice weather appears and to enjoy espresso, cappucchino or white coffee in one of the numerous cafes. Temperature is secondary, in winter people cuddle into the often already prepared blankets.

It´s not defenitely settled where the name 'coffee' comes from, how it made its way into the Bavarian capital however is already known: 1683Vienna was besieged by the Turkish army whereupon the Bavarian elector Max Emanuel II. hurried to help the Austrian Emperor Leopold. The defeated Turks left the coffee and that´s how the vitalizing beverage came to Bavaria and Munich in the end. 1726 there existed seven coffee house owners yet, who were under the protection of the corona. 1775Sardis Cafe opened up below the arcades at the entrance of Hofgarten as the first true coffee house, which afterwards was bought by Luigi Tambosi and by this name is in great demand since, especially among Munich´s high society. Soon after that opened the first newspaper cafe which was similar to the coffeehouses in Vienna. From 1804 on food is sold besides beverages. But these institutions were rather meeting points for the more simplistic and got by and by more pompous.

1888 opened one of these gorgeous coffeehouses, equipped with exotic palm trees, dabbling fountains and luxurios halls. The noble Cafe Luitpold, which was allowed to bear the name of the former prince regent, exists this very day in an impressing Neo-Renaissance building and enjoys great popularity owing to the homey and still exclusive atmosphere.

One of Munich´s most popular coffeehouses is of course the world-famous traditional house Alois Dallmayr. Built in 1912, it was rebuilt in 1948 in early neo-classical style after entire destruction in World War II. Inside the visitor meets marble columns, a fountain adorned with putti and above all an abundance of rarities and delicacies, you simply won´t be able to restist. In the ancient coffee section the freshly roasted beans are filled if desired in boxes, that still are graced by the lettering "Hoflieferant" (purveyor to the court).

By the turn to the 20th century the concert café came from Paris to Munich and famous bandmasters and soloists were showing their skills. The eldest of these concert cafés arose 1899 as "Kaffeesiederei und Bier- und Weinausschank, Speiseabgaben, Zuckerbäckerei und Beherbergung" (übers.:...). Then in 1968 the café in the neo-Gothic building close to Theresienwiese was relabeled Mariandl - Café am Beethovenplatz, but the character of a concert café maintained. Today you still listen here to live jazz and classical music and due to the grand piano also now and then to spontaneous concerts of the guests. Following the example of Vienna you can have a Verlängerten, a Melange (white coffee) or a piece of Sacher torte beneath the stuccoed ceiling and the splendorous chandeliers.

A further jewel among coffeehouses is to be found in the historic center. In the Victorian House, as the name implies, you travel back to the Victorian age of Great Britain. Apart from the variations of breakfast named after London´s urban districts you also can enjoy business lunch, dinner as well as about 90 different fresh varieties of tea and mold-made chocolate. Of course they have all sorts of coffee, british cake, biscuits and handmade scones made of milk from happy cows from Cornwall. Thus you may enjoy yourself among all the antiques of England, particularly after an exhausting shopping tour through Munich´s city.