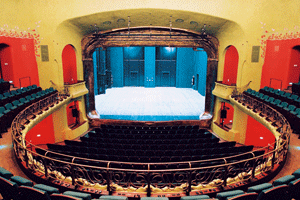 Münchner Kammerspiele, Schauspielhaus Munich has always been a lively theater town. Thunderous applause can be heard somewhere every single day. Both up-and-coming artists and the world-famous are held in awe. Around 60 theaters, big and small, present the public with a choice between traditional and contemporary theater, opera, ballet, musicals or concerts. In musical theater, Munich is proud to be one of the few European cities with two venues, each with a different format: the tradition-rich Bayerische Staats­oper (Bavarian State Opera) with the Staatsballett (State Ballet) and its great international charisma, and the charming Staatstheater am Gärtnerplatz (State Theater on Gärtnerplatz square), which has a somewhat lighter program.

Both venues also stage musicals and operettas. The State Theater is also the home of the city’s second large dance company, the Tanz Theater München (Munich Dance Theater), which is oriented towards modern dance.
Premieres by Richard Wagner and Richard Strauss assured the Bavarian State Opera historical significance in the opera world. Nowadays the State Opera still impresses the residents of Munich. Every year, about 600,000 spectators visit about 350 presentations of opera, ballet, concerts and recitals. The annual highlight is the traditional Munich Opera Festival in July, with many glittering opera and ballet premieres.

The Bayerisches Staatsschauspiel (Bavarian State Drama Company) performances are no less glittering, be it classical or experimental. In three different venues – the Residenztheater, the Marstall and the Cuvilliéstheater – audiences can experience all facets of modern theater. Culture lovers can especially look forward to some interesting new productions in the 2011/2012 season when, after 28 years, artistic director Dieter Dorn is succeeded by Austrian director Martin Kušej. You should also definitely get to know the many private theaters in the city, especially the Blutenburgtheater, which has a truly killer program! Every evening, Kammertheater München, which has just moved to new premises, the Teamtheater Tankstelle and the Munich Marionettentheater, all use lots of imagination and a high degree of artistic skill to show their audience what non-subsidized theaters can do.

Even during the summer theater pause, Munich residents don’t have to go without the art enjoyment they’re used to. How about, for example, a performance of the Sommertheater (Summer Theater) in the English Garden?

Cuvilliéstheater
Magical rococo theater that, after being closed for years due to renovations, ceremoniously reopened in June 2008 for the 850th anniversary of the city’s founding. It now provides the right framework for performances by the Bavarian State Drama Company and the State Opera.
›› Altstadt, Residenzstr. 1, Tel. 21 85 01, www.­­­bayerisches­­staatsschauspiel.de

Nationaltheater
Home of the Bavarian State Opera, orchestra and ballet, 2,100 seats, many new productions, more than half a million visitors every year.
›› Altstadt, Max-Joseph-Platz 2, Tickets: 21 85 19 20, www.bayerische.staatsoper.de

Staatstheater am Gärtnerplatz
This theater, built in 1864 , is as pretty as it is festive. A popular musical theater, it offers a varied program consisting of opera, operetta, musical and dance, including its own musical productions and a well-balanced program for children ­and families. From April 2012, productions will take place in the Prinzregententheater and the dance venue schwere reiter because of an urgently needed full renovation.
›› Isarvorstadt, Gärtnerplatz 3, ­Tel. 20 24 11, Tickets: 21 85 19 60, www.staatstheater-am-gaertnerplatz.de

Deutsches Theater
Since October 2008, Munich’s most traditional theater for visiting productions has been attracting audiences to an unusual location: a luxuriously designed tent palace with 1,700 seats in Fröttmaning. The reason for this is the renovation of the usual location in Schwanthaler Straße, which is scheduled to be finished by the end of 2012. In contrast, the program of the Deutsches Theater remains at its usual high quality, with musicals, revues and dance evenings.
›› Fröttmaning, Werner-Heisenberg-Allee 11, Tel. 55 23 44 44, www.deutsches-theater.de

Münchner Kammerspiele
The Schauspielhaus with its recently renovated art nouveau auditorium is the main stage, additional performances at the Werk­raum des Blauen Hauses with 170 seats and at the Neue Haus with 200 to 350 seats.
›› Schauspielhaus, Altstadt, Maximilianstr. 26-28
›› Werk­raum, Hildegardstr. 1
›› Neues Haus, Falckenbergstr. 1 Tel. 23 39 66 00
›› www.muenchner-kammerspiele.de

Münchner Volkstheater
After a multipurpose hall was extensively renovated, the Volkstheater was opened in 1983. The 609 seats are usually well-filled: the audience loves the productions by young up-and-coming directors and guest concerts by international artists.
›› Maxvorstadt, Brienner Str. 50, Tel. 52 35 50, www.muenchner-volkstheater.de

Galli Theater München
Romantic comedies by Johannes Galli plus a fairy tale program for children play in two different venues in Dachauer Straße and the Amalienpassage. Workshops give you the opportunity to act on stage yourself.
›› Maxvorstadt, Dachauerstr. 78, Tel. 7 80 783 14, www.galli.de

Komödie im Bayerischen Hof
With 570 seats the only German theater of its size inside a luxury hotel, program of proven successes, works by young playwrights, musicals and comedies, from classical to modern, German stars such as Uschi Glas, Uwe Ochsenknecht, Heiner Lauterbach or Jochen Busse.
›› Altstadt, Promenadeplatz 6, Tel. 29 16 16 33, www.komoedie-muenchen.de

Sommertheater im Englischen Garten
Whether rain or shine, the Munich summer theater is definitely always worth a visit. Musically upbeat classics have been staged in the amphitheater of the English Gardens in July for over 20 years. The performances in September & October take place in the Mohr Villa in Freimann. In addition, guest performances by a wide variety of theater troupes enrich the existing program.
›› Amphitheater: Englischer Garten north, follow the signs there
›› Mohr Villa: Freimann, Situlistr. 73
›› Contact: Rümelinstr. 8, Tel. 98 93 88
›› www.­muenchner-sommertheater.de

Teamtheater Tankstelle
Theater in a listed building of an old garage, 100 seats, classic and contemporary plays, international playwrights, French-language theater, readings, next door to the Teamtheater Comedy.
›› Altstadt, Am Einlaß 2a, Tel. 2 60 43 33
›› Am Einlaß 4, Tel. 2 60 66 36
›› www.teamtheater.de

Theater Halle 7
Model project established in 2001 that offers jobless actors the opportunity twice a year to present themselves to a wide audience. With success, for first-class contemporary drama is still being shown here.
›› Berg am Laim, Kultfabrik, Fach 103, Grafinger Str. 2, Tel. 53 29 78 29, www.inkunst.de

Theater...und so fort
Visiting theater and dancing groups, performs contemporary works, comedies, drama workshops, as well as a puppet theater for children. Since moving to its location in Schwabing, this theater now has its own restaurant and twice as many seats.
›› Schwabing-West, Kurfürstenstr. 8, Tel. 23 21 98 77, www.undsofort.de

Heppel & Ettlich im Drugstore
Heppel & Ettlich found a new home in the heart of old Schwabing in 2009. Audiences are offered the tried and tested formula of satire, chansons and comedy on the upper floor of the Drugstore.
›› Schwabing, Feilitzschstr. 12, Tel. 38 88 78 20, www.heppel-ettlich.de

Kultur im Schlachthof
As a combination of theater and restaurant, the Schlachthof brings joy to the hearts of culture-hungry audiences. In the large hall and in the smaller room, you can enjoy cabaret, theater, readings and concerts.
›› Isarvorstadt, Zenettistr. 9, Ticket-Tel. 72 01 82 64, www.schlachthof.de

Kleines Theater im Pförtnerhaus
Raise the curtain for Punch and Co., every Sunday and Wednesday for all children aged 3 and above.
›› Bogenhausen, Oberföhringerstr. 156, Tel. 95 31 25, www.kasperlbuehne.de

GOP Varieté-Theater
Located since 2008 in the small Komödie am Max II, the fifth variety theater of the successful GOP Entertainment Group provides an unusual synthesis of the arts, consisting of world-class performances, music, chanson and culinary expertise. When buying tickets, you can book shows with or without a meal, but always with a lot of fantasy and ready to fulfill the highest demands!
›› Altstadt, Maximilianstr. 47, Tel. 21 02 88 444, www.gop-entertainment-group.de

Entity
Founded by Danny Strike and Alison Sandford in 1999, participants have time to develop, experiment, and have fun, no auditions. Workshop participants are invited to perform.
›› Info: Tel. 0 700/36 84 89 00, www.entitytheatre.com