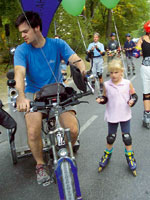 Wether it´s football, ice hockey or athletics – Düsseldorf has a lot to offer its sports fans. Every summer, for example, the Tennis Team Championship is held at the Rochusclub in Düsseldorf, where the world´s eight best nations compete against each other in singles and doubles.

And in winter, the state capital offers a special scene on the banks of the Rhine to top cross-country-skiers, who fight for World Cup points every year here, watched by more than 200,000 spectators.

But not only professionals are encouraged in the Rhine metropolis. All the other inhabitants of Düsseldorf are always on the go as well. The city´s excellent recreational facilities leave them hardly any choice.

Especially in the summer months, when enthusiastic onlookers cheer on the more than 3,000 participants in the Düsseldorf marathon during their run through the old city, or when thousands of inline skaters transform the city into a huge party during one of their annual Roller Nights.

The city´s parks and woodlands are an invitation to jogging and bicycling. The residents of the Rhine metropolis prefer to do this together, in one of the numerous running or riding groups.

Anyone wishing to act further on this feeling of community is well served in one of the city´s approximately 380 sports clubs. The city sports federation offers more information on the wide-ranging club offerings on the Internet at www.ssbduesseldorf.de.