New to Düsseldorf – the mini metropolis 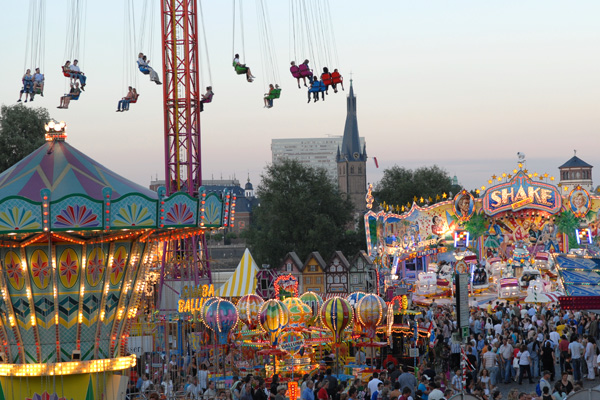 People who come new to Düsseldorf will soon discover, that the small metropolis beside the Rhine has big things to offer: Düsseldorf is Germany’s highest earning advertising and fashion location as well as a carnival stronghold, a cultural center and a garden city.
From the impressive Königsallee shopping boulevard to the old town, knownas the world’s longest bar, the city on the Rhine has many faces and local people are proud of their home.

Düsseldorf citizens don’t just show their close connection to their city during Carnival season, but also during longestablished events such as the Größte Kirmes am Rhein or during traditions such as the Radschlägerturnier (cartwheel contest).

This contest sees hundreds of children competing against each other every summer.
The street festival dates back to 1288 when Düsseldorf received its town charter and children are supposed to have turned cartwheels to express their joy.
The affection of Düsseldorf natives for their home, which they fondly call the "Rheinmetropole" (Rhine metropolis) is still omnipresent today.

With 585,000 inhabitants, Düsseldorf strictly speaking is not really a metropolis but it is located in the middle of Germany’s most populous and most densely settled urban region, the Rhein-Ruhr, where 10 million people live. The population of Düsseldorf, the state capital, is constantly growing thanks to the relatively high – for a small city – numbers of newcomers from the rest of Germany and around the world.

The city has finally overtaken its rival Dortmund and for some years has been in a close race for the title of Germany’s seventh biggest city and the right to call itself North-Rhine Westphalia’s most populous city after Cologne – although Düsseldorf, which has always had a deep love-hate relationship with Cologne, would never allow itself to be referred to in second place after its neighbor.

The way the 100,000 or so foreign immigrants living in Düsseldorf enrich its cultural and business life is apparent around Immermannstraße, home to most of the 7,000 Japanese immigrants, who have brought a touch of Asian flair to the Rhine.