Altes Schauspielhaus
This Art Nouveau theater in Stuttgart’s heart is known for a high standard of acting. Its productions of classic dramas have given it a good reputation beyond the borders of Baden-Württemberg. Its exemplary theater work for young people also enrich Stuttgart’s cultural range.
›› Mitte, Kleine Königstr. 9, Tel. 2 26 55 06, www.schauspielhaus.org

Die Krimifabrik
This theater offers thrillers in an intimate atmosphere with just 55 seats. The small size means that the audience is immersed right in the middle of the action at the scene of the crime, experiencing a great deal of suspense. They can also help search for who-done-it as feverishly as the clever detectives on the stage.
›› Süd, Falbenhennen Str. 2a, Tel. 66 48 73 40, www.die-krimifabrik.de

Dreigroschentheater
Stuttgart’s smallest theater surprises with a repertoire that’s as diverse as it is engrossing, from classic dramas to crime to children’s programs. Anyone who enjoys the theater and has the talent to enthrall an audience with their acting skills and stage brilliance is welcome to audition here to become an actor.
›› Mitte, Kolbstr. 4c, Tel. 60 60 00, www.dreigroschentheater.de

Junges Ensemble Stuttgart
This company stages drama adapted especially for children and young people. It is well established in Stuttgart’s theater scene. And it’s successful. Every year, the company receives invitations to various theater festivals, such as the Baden-Württemberg International Children’s and Youth Theater Festival.
›› Mitte, Eberhardstr. 61a, Tel. 21 84 80-8, www.jes-stuttgart.de

Staatstheater
Take note: The Schauspielhaus (Playhouse) on Oberer Schlossgarten, which is part of the Stuttgart State Theater, will be reconstructed till February 2012, therefore no program is taking place there. Performances have moved to the subsidiary theaters at Türlenstraße and Löwentor (Nord).
›› Nord, Niederlassung Türlenstr. (Arena, Werkhalle & Box)
›› Nord, Am Löwentor
›› www.staatstheater.stuttgart.de

Studiotheater
Functioning as a springboard for young actors and directors, this studio theater offers not only standard theater performances, but also an experimental stage on which independent groups can present guest productions.
›› Mitte, Hohenheimer Str. 44, Tel. 24 60 93, www.studiotheater.de

Theater am Olgaeck
The diverse stage program that the “Theater am Olgaeck” has been offering to all culturally-minded Stuttgarters since 2004 is popular among young and old. Its plays, recital evenings and author readings all concentrate on the subject of eastern Europe. The dedicated company has gained a good reputation far beyond Stuttgart.
›› Mitte, Charlottenstr. 44, Tel. 23 34 48, www.theateramolgaeck.de

Theater der Altstadt
Small but nice private theater in western Stuttgart. Anything that grabs the fancy of the company is staged here from Faust to “Linie Eins” – resulting in productions that are often well worth seeing. You won’t miss the theater – it’s located directly by Feuersee lake and can be recognized by a large plaster bust of Arthur Schopenhauer perching above the entrance.
›› West, Rotebühl str. 89, Tel. 61 55 34 64, www.theater-der-altstadt.de

Theater über den Wolken
This unusual playhouse, which is part of the Theater Rampe and Altes Schauspielhaus, is only for those with no fear of heights because performances take place 144 m high on the television tower’s stage. It’s certainly worth a trip up – where else can you get a great view of the city, along with lively, intelligent drama?
›› Degerloch, Jahnstr. 120, Im Stuttgarter Fernsehturm, Tel. 226 55 05, www.fernsehturmstuttgart.com/theater

Wilhelma Theater
The students from the College of Music and Performing Arts who appear here have already made a name for themselves with their high-quality mix of classical opera and straight drama. It’s worth a visit to see for more than just the productions – the playfully Romantic-style theater building also provides a proper framework for a perfect visit to the theater.
›› Bad Cannstatt, Neckartalstr. 9, Tel. 95 48 84 0, www.wilhelma-theater.de

Kelley Theatre
This small, purely English-language theater was founded in 1981 and it has received many awards since then. That makes productions staged here well worth seeing. The company is made up of amateurs and professionals. Shows are staged in front of a loyal audience that especially loves the musical productions, such as the Les Misérables.
›› Möhringen, Kelley Barracks, Tel. 7 29 28 25, www.kelleytheatre.de

FITZ Figurentheater
For more than 20 years, the FITZ puppet theater has been presenting successful plays with artful figurines and objects. It offers an attractive program for children and also evening shows for grown-ups.
›› Mitte, Eberhard Str. 61a, Tel. 24 15 41, www.fitz-stuttgart.de

Kruschteltunnel
The Studio Theater’s children’s theater transports its little spectators into the land of mythical creatures, fairies and magical dragons, or it charts a course to remote pirate islands. In addition, children can take part in theater workshops that give them their first experiences on stage, but are mainly a lot of fun.
›› Mitte, Hohenheimer Str. 44, Tel. 2 36 14 81, www.studiotheater.de

Nellys Puppentheater
The “stars” of the puppet theater give their all for children aged 3 years and older. Musicals with marionettes, puppet shows or classic marionette theater – the imagination of the small theater knows no bounds.
›› Mitte, Charlottenstr. 44, Tel. 23 34 48, www.nellys-puppentheater.de

Theater am Faden
Both children and adults love the poetic performances of the wood-carved stage stars. The theater specializes in the interpretation of fairy tales from all over the world.
›› Heslach, Hasenstr. 32, Tel. 60 48 50, www.theateramfaden.de

Theater in der Badewanne
Children and youngsters are introduced to the world of puppet theaters with a lot of humor and imagination in this theater whose auditorium looks like a bathtub (Badewanne).
›› Nord, Stresemannstr. 39, Tel. 2 57 38 25, www.theater-in-der-badewanne.de

Theater Tredeschin
This idyllic backyard theater offers a multifaceted repertoire of puppet shows for children and masques and plays for youths and grown-ups. Children can also celebrate their birthdays here with Punch and his friends and they can also explore the magic of the stage on theater courses.
›› Ost, Haußmannstr. 134c, Tel. 48 67 27, www.tredeschin.de

Friedrichsbau Varieté
Every evening, artists in this well-known variety theater take their audience into a dream world of artistry, comedy, magic and acrobatics. Spectators can enjoy themselves in two ways here: The culinary offerings are as worth a look as the enchanting shows.
›› Mitte, Friedrichstr. 24, Tel. 2 25 70 70, www.friedrichsbau.de

Renitenztheater
The big stars of cabaret have been at home in the tradition-rich Renitenztheater since 1962. Helmut Qualtinger, Thomas Freitag and Desirée Nick are just a few of the artists that try to knock ’em dead here with great political-literary cabaret.
›› Mitte, Büchsenstr. 26, Tel. 29 70 75, www.renitenztheater.de

Theaterschiff
This theater ship, which once served as a freighter carrying animal food, now lies at anchor in Bad Cannstatt and is totally dedicated to light entertainment. Comedies and cabaret are presented to the public on a stage. You can end the evening in the Frauenlob Bar.
›› Bad Cannstatt, Am Mühlgrün, Tel. 50 62 27 66, www.theaterschiff-stuttgart.de

Opernhaus/Staatstheater
In Stuttgart’s resplendent and elegant temple to the Muses, you can experience top-class opera and ballet productions. In particular, ballet fans value the expertise of the Stuttgart Ballet Company. In the 1970s, the company became world famous due to choreographer John Cranko and undertook tours around the world.
›› Mitte, Oberer Schlossgarten 6, Tel. 20 20 90, www.staatstheater.stuttgart.de

Apollo-Theater
The Apollo, like the Palladium Theater, belongs to the Stuttgart SI-Centrum, and is a place for great entertainment. Shows such as the Queen musical We Will Rock You or “Ich war noch niemals in New York” (I’ve never been to New York), (since November 18th 2010), ensure that there are always standing ovations and sold-out performances.
›› Möhringen, Plieninger Str. 102, Tel. 0 18 05/44 44, www.stage-entertainment.de

Palladium-Theater
The 1,800 seats in this modern show temple provide a great view of world-famous musical productions, including many world premieres such as the mystery musical Wicked and the hit Tanz der Vampire (Dance of the Vampires).
›› Möhringen, Plieninger Str. 109, Tel. 0 18 05/51 06 10, www.stage-entertainment.de

Kulturwerk
Located in eastern Stuttgart, the Kulturwerk provides its visitors and guests with culture and gastronomy over 1,800 sq m. Regular theater, cabaret, comedy, dance and music events take place in the former power plant on the Kübler company grounds. The Kulturwerk can also be rented for private events. On request, the gastronomic services can provide food and drinks, a party service and catering.
›› Ost, Ostendstr. 106A, Tel. 4 80 65 45, www.kulturwerk

Merlin
The Merlin cultural center opens its stage to cabaret. During the Stuttgart Cabaret Festival or at concerts, you will feel comfortable here and in the associated café if you are searching for good entertainment.
›› West, Augustenstr. 72, Tel. 61 85 49, open: except on Mondays and during events, www.merlinstuttgart.de

Rosenau
The emphasis is on culture here. Besides a bar and restaurant, the Rosenau has its own vaudeville stage. Many comedy, cabaret and music greats have appeared here.
›› Mitte, Rotebühlstr. 109b, Tel. 6 61 90 20, www.rosenau-stuttgart.de

Treffpunkt Rotebühlplatz
The Treffpunkt Rotebühlplatz is much more than a cultural center – it’s one of the most important cultural and higher educational establishments in Stuttgart. The center houses under one roof the Volkshochschule adult education center, the Rotebühl­theater with its experimental stage, the music school, the city’s media library and many more cultural facilities. This house of many talents also finds room for exhibitions, concerts, lectures and the distinguished Solo-Tanz-Theater-Festival.
›› Mitte, Rotebühlplatz 28, Tel. 1 87 38 04, www.treffpunkt-rotebuehlplatz.de 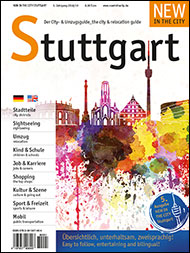