What great shows in Düsseldorf! 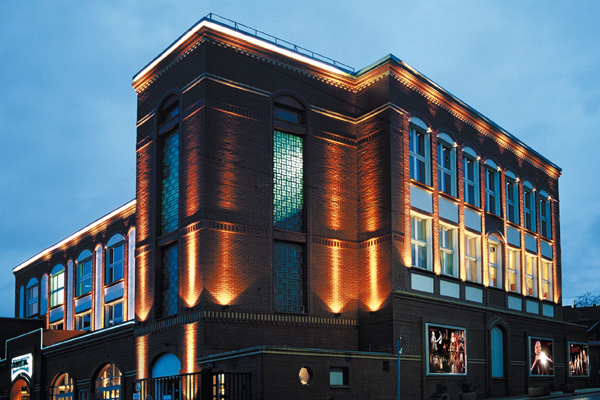 Capitol
A cultural landscape thrives in the multiple layers of Düsseldorf, a world city with village charm. It has no problem keeping pace with large German metropolises like Munich and Berlin. Here comic, clowning traditions are at home as much as the avant garde.

It is hard to choose from its varied theater and music scenes or its internationally renowned museums and galleries. This is where great masters and poets such as Heinrich Heine and Robert Schumann created their works and visual artists left their stamp on the famous “Düsseldorf School.”
Throughout the city in autumn, one notices the air of an artistic metropolis. After a pause for the summer, theaters re-open and celebrate glittering premieres. The final bell sounds in the lobby of the renowned German Opera on the Rhine and the audience streams to their seats. The first gallery openings of the season beckon, offering chic visitors appetizers and Prosecco along with the inspiration and enjoyment of art.

Theater cafeterias specialize in the symbiosis of art and culinary science. Visitors start off with a champagne reception and end with a tasty selection of food. A visit to the marionette theater should definitely be part of your personal repertoire. Aside from its playhouse performances, it offers adult-oriented productions that are more than worth the visit. An overview of the city’s artistic variety awaits you on the following pages. One thing is certain: Düsseldorf, the Rhenish muse, will enchant you!

Komödie
The stars of Düsseldorf comedy (including many well-known figures from German TV such as Hardy Krüger Jr. and Ralf Bauer) have provided light-hearted theater evenings for more than 35 years. They appeal to a broad audience with plays that guarantee mental refreshment as well as a work-out for your laughter muscles.
›› Stadtmitte, Steinstr. 23, Tel. 32 51 51 & 13 37 07, www.komoedie-duesseldorf.com

Schauspielhaus
This spoken word theater opened in 1904 and was divided into a small and a large venue. Under the management of Gustaf Gruendgens (1947-1955), it rose to become one of the most important German-speaking theaters. Its uniquely shaped home today was built in 1970 and has just been fully renovated. Performances will begin again just on time for the 2011/2012 season, when the new theater director will be Steffan Valdemar, who is a Swedish national.
›› Stadtmitte, Gustaf-Gründgens-Platz 1, Kartenkasse Tel. 36 99 11, www.duesseldorfer-schauspielhaus.de

Theater an der Kö
A classic boulevard stage, founded by well-known TV actor René Heinersdorff. Here the specialty is light entertainment, but not without artistic appeal – which the often prominent actors execute to perfection. Its approximately 300 performances annually are completely sold out most of the time and are appreciated beyond the limits of Düsseldorf.
›› Stadtmitte, Schadwo Arkaden, Tel. 32 23 33, www.theateranderkoe.de

Theater an der Luegallee
Since 1980, actors have performed their way into the hearts of audiences here. The program at this theater offers thoughtful, musical, and funny as well as serious performances. The theater’s small size gives audiences a direct connection to events on stage. A small bar offers refreshments before or after the show.
›› Oberkassel, Luegallee 4, Tel. 57 22 22, www.theateranderluegallee.de

Theater Flin
For more than 10 years, this cabaret theater with just 75 seats has stood for heart-warming entertainment at a high artistic level. Without committing to a certain genre, it has offered drama, comedy, cabaret, and children’s theater. There are also guest performances by well-known figures from the comedy scene.
›› Flingern-Nord, Ackerstr. 144, Tel. 6 79 88 71, www.theaterflin.de

Theater Kantine
A visit to the Theater Kantine is something special. Where else would you be greeted with champagne and then invited to sit down to enjoy delicious food after the presentation? And the small company, with just 5 plays in its repertoire, thrills audiences evening after evening with wit and charm. The theater is usually filled to the very last seat.
›› Mörsenbroich, Lenaustr. 29, ab Dezember 2011: Lierenfeld, Ronsdorfer Str. 74, Tel. 5 14 52 00, www.theaterkantine.de

Theater for kids & teens
Düsseldorfer Marionettentheater
Children and adults love the poetic productions of this “wooden” cast. The figures don’t merely shine in fairy tales and fables of various authors. Classic musical works, such as The Magic Flute by W.A. Mozart, are in its repertoire as well.
›› Carlstadt, Bilker Str. 7, Tel. 32 84 32, www.marionettentheater-duesseldorf.de

Junges Schauspielhaus
A former torpedo factory houses this company, owned by the Düsseldorf Playhouse. Adults, children and young people are all invited to get to know the multifaceted repertoire of this small, talented troupe. They all share in the players’ fears, longings and dreams, and in everything from fairy tales to contemporary plays about today’s political issues.
›› Mörsenbroich, Münsterstr. 446, Tel. 8 52 37 10, www.duesseldorfer-schauspielhaus.de

Puppentheater an der Helmholtzstraße
Children from 2 years old and upwards can have their first experience with the world of the theater here. Playful productions with home-made dolls are fun for the youngest children and the young at heart as well. Whether it’s Kasper, the Little Dragon or The Seven Little Kids performing on stage, they manage to bring a smile to everyone watching and transport them from daily life for a few hours.
›› Friedrichstadt, Helmholtzstr. 38, Tel. 37 24 01, www.puppentheater.de

Cabaret & variety
Haus der Freude
The House of Joy does justice to its name, since the great entertainment guarantees that emotion. The famous cabaret star Manes Meckenstock personally appears on stage for many performances. Audiences also see the finest, well-known up-and-coming stars from small theaters, cabarets and comedy. It’s even more authentic in its new premises that offer Rhineland cuisine and a large beer garden in the former Volksgarten restaurant.
›› Bilk, Auf´m Hennekamp 10, Tel. 63 55 98 80, www.himmelundaehd.de

Kom(m)ödchen
Greats like Volker Pispers, Matthias Deutschmann und Harald Schmidt established their careers on this cabaret stage, which Kay and Lore Lorentz founded in 1947. It has had a regular cast up to the present.
›› Altstadt, Kay-und-Lore-Lorentz-Platz, Karten unter Tel. 32 94 43, www.kommoedchen.de

Roncalli´s Apollo Varieté
Among the most beautiful of Europe’s music hall shows, this theater fulfills the promise of its appearance and ignites a firework of first-class entertainment. You aren’t merely entertained with dream productions, classic variety numbers and clowns at their best. Your taste buds are treated to delicious appetizers and a full-course meal.
›› Unterbilk, Apollo-Platz 1, Tel. 8 28 90 90, www.apollo-variete.de

Theateratelier Takelgarn
The stage program ‘knits’ together a diverse program, from story-telling time, to comedy and cabarets, to magic and drag shows. In the intimate atmosphere of the small theater hall, the audience is directly involved with what is happening on stage.
›› Friedrichstadt, Philipp-Reis-Str. 10, Tel. 31 29 93, www.takelgarn.de

Opera, concert & dance
Deutsche Oper am Rhein
Since 1956, the renovated Düsseldorf Opera House and the Duisburg Theater have been combined in a theater community called German Opera on the Rhine. The Düsseldorf Opera House is in an open location between Hofgarten and Königsallee and is equipped with all the technological refinements that transform a modern opera company into a playground for creativity and presentation.
›› Deutsche Oper am Rhein Düsseldorf, Stadtmitte, Heinrich-Heine-Allee 16a, Tel. 8 90 80
›› Theater Duisburg, Neckarstr. 1, Tel. 0 203/30 09-0
›› www.rheinoper.de

tanzhaus nrw
The 4,000 sq m space of a former streetcar depot is now the venue for contemporary dance, courses and workshops, and festivals. 2 stages and 8 studios make the dance house a mecca for all dance fans, and not just from North Rhine-Westphalia.
›› Flingern-Süd, Erkrather Str. 30, Tel. 17 27 00, www.tanzhaus-nrw.de

Tonhalle
In a place where people once marveled at the constellations, people now applaud the stars of the Düsseldorf Symphony Orchestra. The former planetarium, complete with giant dome, has made a name for itself. Top-notch virtuosos and orchestras appear here.
›› Pempelfort, Ehrenhof 1, Tel. 8 99 61 23, www.tonhalle-duesseldorf.de

Spektakulum
The Spek­takulum is devoted to culture for the young and offers children and youth a variety of opportunities for entertainment. It has children and puppet theaters, cabarets, concerts, parties as well as a café for students.
›› Benrath, Hospitalstr. 43, Tel. 8 99 84 59, www.spektakulum.net

Zakk
There is always something going on in the Center for Action, Culture and Communication – known as Zakk for short. Sometimes it might be politically-oriented theater, other times wild party nights or concerts. In the meantime, you can take part in heated discussions or while away the time in the beer garden.
›› Flingern-Süd, Fichtenstr. 40, Tel. 9 73 00 10, www.zakk.de