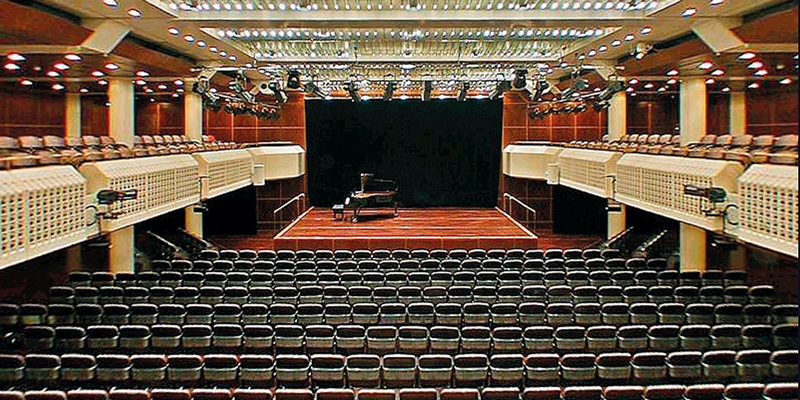 Oper Frankfurt
Highly productive opera house respected throughout Europe with a classical repertoire and special projects such as “Opera for Kids,’’ a children’s and youth program, and seminars and discussions with artists.
›› Innenstadt, Untermainanlage 11, Tel. 13 40 400, www.oper-frankfurt.de

Die Katakombe
A former basement theater, founded by an actor collective, which is always on the lookout for new performance forms. Revues and song evenings, as well as a children’s theater, also form part of the repertoire.
›› Ostend, Pfingstweid Str. 2, Tel. 49 17 25, www.katakombe.de

Die Komödie
Frankfurt’s boulevard stage for all those who appreciate their theater on the more easily digestible side and look forward to an evening of merriment.
›› Altstadt, Neue Mainzer Str. 14-18, Tel. 28 43 30, www.diekomoedie.de

Freies Schauspiel Ensemble
This company has been interpreting the classics in a very individual manner outside mainstream theater for nearly 30 years.
›› Gallus, Schmidt Str. 12, Tel. 596 94 90, www.freiesschauspiel.de

Fritz Rémond Theater im Zoo
Small house attached to Die Komödie with a multifaceted program in all genres. A particularity is that the theater is the only stage in the world within a zoo.
›› Ostend, Alfred-Brehm-Platz 16, Tel. 43 51 66, www.fritzremond.de

Gallus Theater
Theater and production house for free collectives from Frankfurt and the surrounding area, open to international guest performances of all kinds with a multicultural flair.
›› Gallus, Kleyer Str. 15, Tel. 75 80 60 20, www.gallustheater.de

Künstlerhaus Mousonturm
Extravagant playhouse in an expressionistic industrial building from 1922, for innovative and experimental productions from the entire corpus of the performing arts. It invites national and international ensembles and artists for guest performances and offers a platform for young artists.
›› Ostend, Waldschmidt Str. 4, Tel. 40 58 95 20, www.mousonturm.de

Stalburg Theater
The innovative Stalburg Theater is one of the most highly renowned small-stage theaters in the entire Rhein-Main area. The theater is in an over 140-year-old dance hall in a former cider pub. The finest in cabaret, theater, jazz or classical music is offered here daily. Guests sit at their own tables and can enjoy snacks and house-pressed cider. The legendary Stoffel takes place for four weeks in the summer. This free open air theater in the Günthersburger Park enthrals thousands year after year.
›› Nordend-West, Glauburg Str. 80, Tel. 25 62 77 44, www.stalburg.de

The English Theatre
The English Theatre has staged a large, diverse and high-level repertoire for more than 30 years, from classics to contemporary plays, dramas and comedies, thrillers, satire and musicals. The Bar James, with its lounge area and large selection of cocktails on two floors, is also worth a visit.
›› Innenstadt, Gallusanlage 7, Tel. 24 23 16 10, www.english-theatre.org

Kinder- und Jugendtheater
Imaginatively staged productions of all the best-known and loved works from children’s literature, from Kipling to Preuss­ler. Children aged six and up can also breathe in the stage atmosphere and gain artistic experience in theater workshops.
›› Heddernheim, Walter-Möller-Platz 2, Tel. 06101/, 55 74 24, www.kiju-theater.de

Die Käs – Kabarett in der City e.V.
The artist Sinasi Dikmen writes and performs polemic plays such as You Shouldn’t Turk or Don’t Do Theater, Turk! for his Cabaret Tailor Shop, the only Turkish cabaret with a German program. It has become an institution.
›› Ostend, Waldschmidt Str. 19, Tel. 55 07 36, www.die-kaes.com

Die Schmiere
The only repertory cabaret in Germany, in the basement of a Carmelite convent, featuring an unusual combination of cabaret, revue, show and comedy. Also a night of magic, Magic Monday, once a month.
›› Altstadt, Seckbächer Gasse 14, Tel. 28 10 66, www.die-schmiere.de

Neues Theater Höchst
Small-stage theater with performances by national and international comedy stars as well as a continuous variety program. For literary audiences, there’s readings of European classics. Also a cinema and exhibitions by well-known visual artists in the foyer.
›› Höchst, Emmerich-Josef-Str. 46a, Tel. 33 99 99 0, www.neues-theater.de

Tigerpalast Varieté Theater
The Tigerpalast has offered a mix of art, dance and song with nostalgic flair in a former ballroom for more than 20 years. Coupled with the culinary excellence of head chef Alfred Friedrich in the in-house gourmet restaurant, a visit is a feast for all the senses.
›› Innenstadt, Heiligkreuzgasse 16, Tel. 92 00 22-0, www.tigerpalast.de

Alte Oper
This wonderful building from the late neoclassical period is a Frankfurt landmark and has returned to serving the arts since its reopening in 1981. Numerous music performances, from symphony and chamber concerts to cabaret evenings and musicals, and also conferences.
›› Innenstadt, Opernplatz, Tel. 13 40-0, www.alteoper.de

HR Sinfonieorchester
The symphony orchestra of the Hessian Broadcasting company has existed for over 80 years and boasts international renown, having traveled to Eastern Europe and Asia as well as cooperating with internationally recognized guest conductors. The Estonian Paavo Järvi became director in the 2006/2007 season. One can be persuaded of the Orchestra’s musical diversity and exciting interpretations during one of their many performances at the Old Opera House.
›› Innenstadt, Opernplatz, Tel. 13 40-0, www.alteoper.de, www.hr-sinfonieorchester.de

The Forsythe Company
With the founding of this ballet troupe, the renowned choreographer William Forsythe enabled the work of the Frankfurt Ballet company to continue. He brings a breath of fresh air into the productions with performance installations and multimedia work.
›› Tel. 90 73 99-100, www.theforsythecompany.de
›› Spielstätte: Bockenheimer Depot, Bockenheim, Carlo-Schmid-Platz 1, Tel. 1 34 04 00

Theaters in the Rhein-Main region

Mainzer Kammerspiele
The performance spectrum of this private theater’s nine free ensemble ranges from traditional and experimental spoken word theater via contemporary ballet and current revues and all the way to musicals for children. Guest performances by well-known artists round out the program.
›› 55116 Mainz, Fort Malakoff Park/Rhein Str. 4, Tel. 0 61 31/22 50 02, www.mainzer-kammerspiele.de

Staatstheater Mainz
Operas, concerts, ballet performances, plays and youth theater at three different locations. They have taken place in the large main playhouse since 1910, the smaller house and the TIC workroom (Theater in the City), which is a former cinema.
›› 55116 Mainz, Gutenbergplatz 7, Tel. 0 61 31/28 51-0, www.staatstheater-mainz.de

t-raum
Perhaps Germany’s smallest theater in Germany, the t-raum offers with a true living room atmosphere with its 38 seats. Reservations are therefore a must. Comedies, satires and cabaret are on the program.
›› 63065 Offenbach, Wilhelm Str. 13, Tel. 0 69/80 10 89 83, www.of-t-raum.de