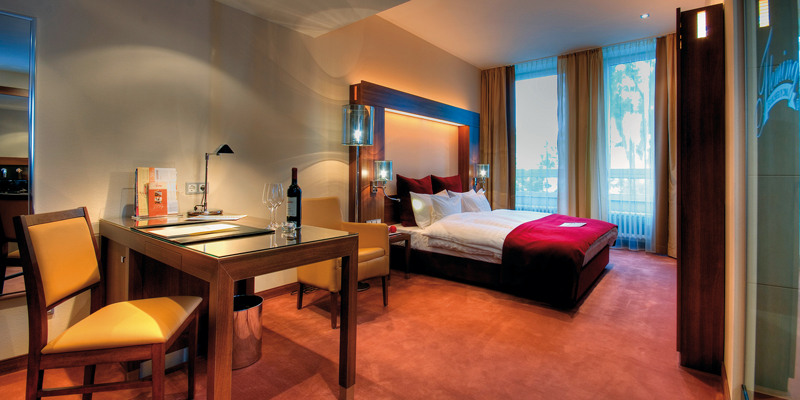 Fleming´s Deluxe Hotel Frankfurt City
178 Euro and up
This Frankfurt hotel opened in April 2008 as the first branch with the new Fleming’s Deluxe concept. The 100 rooms and six suites have the highest-quality equipment, from an LCD flat-screen TV to a laptop-suitable safe; rooms in the Superior category even have an iPod docking station. In addition, textiles and materials in warm earth tones, combined with modern design elements, provide a stylishly friendly atmosphere. The 7th floor contains a business lounge, a bar and a restaurant with a terrace that offers an incredible view over the roofs of Frankfurt to the Taunus.
›› Innenstadt, Eschenheimer Tor 2, Tel. 4 27 23 20
www.flemings-hotels.com

Fleming´s Hotel an der Neuen Börse
145 Euro and up
Opened in 2006 as the third member of Fleming’s Hotels & Restaurants. 146 rooms and 6 suites with a modern design, with high-quality materials and fine woods. 16 conference rooms and suites with multimedia conference equipment. In addition, there are two restaurants and a delicatessen, as well as a 130 sq m large fitness area with workout room, sauna, steam bath, solarium and relaxation zone.
›› Bockenheim, Elbinger Str. 1-3, Tel. 50 60 40-0
www.flemings-hotels.com

Frankfurt Marriott Hotel
129 Euro and up
Directly opposite the trade fair grounds and the festival hall, Europe’s tallest hotel is located on floors 26 to 44. Inside, the hotel has 588 elegant guest rooms, including 23 suites, all of which have not only the usual equipment – radio, TV, pay TV and a minibar – but also high-speed Internet access, individually controllable air conditioning, windows that can be opened and a large desk. If you decide to leave your room despite all this, you’ll find that the hotel also has a fitness center with sauna, solarium, whirlpool and optional massages, four international restaurants, 15 conference rooms and the largest – covering 700 sq m – ballroom in Frankfurt.
›› West­end-Süd, Hamburger Allee 2, Tel. 7 95 50
www.frankfurt-marriott.de

Gerbermühle
150 Euro and up
During his lifetime, Goethe honored the Gerbermühle with his visits. So it’s not surprising that the five individually arranged and furnished suites are named after people who played a role in the life of the poet. The other 13 rooms in the small, newly built hotel also provide the same level of comfort, with a flat-screen TV, free Internet access, air conditioning, minibar and friendly service.
›› Sachsenhausen, Gerbermühl Str. 105, Tel. 689 777 90
www.gerbermuehle.de

Hilton
185 Euro and up
Located near the Frankfurt stock exchange and surrounded by a park, this relatively recent branch of what is probably the most well-known hotel chain in the world has 342 spacious rooms and suites in five price and equipment categories, a restaurant with a beautiful terrace, two bars, a fitness and spa center, a 25 x 15 m indoor pool and 16 modern meeting rooms. Guests in the Executive rooms and suites also have access to the Executive Club Lounge, with a view of the old opera house, free continental breakfast and free drinks and snacks.
›› Innenstadt, Hoch Str. 4, Tel. 133 80 00
www.hilton.de/frankfurt

Hilton Frankfurt Airport Hotel
199 Euro and up
Starting in summer 2011, this hotel will offer guests 146 standard rooms, 83 exec-utive rooms, 16 suites, 3 rooms suitable for disabled guests as well as a Presidential suite. Its location near the city in Frankfurt’s architectural masterwork, The Squaire, at the airport is ideal for business clients. It also offers the high level of services typical for a Hilton hotel.
›› Flughafen, The Squaire, Hugo Eckener Ring, Tel. 26 01 20 00
www.hilton.de

Hilton Garden Inn Frankfurt Airport
125 Euro and up
Another branch of the well-known Hilton luxury chain opens in summer 2011 in Frankfurt’s new, futuristic mini-city, The Squaire. The Hilton Garden Inn will have 334 guest rooms. Its direct access to the airport terminals and its business-oriented facilities make the hotel an ideal overnight place for business travellers.
›› Flughafen, The Squaire, Tel. 4 50 02 50
www.hiltongardeninn.de

Hotel Hessischer Hof
170 Euro and up
Tradition-rich luxury hotel in the West­end. The extensive range of services includes fresh fruit and mineral water every day, free use of the minibar and the Internet and a free shoe shine service. The rooms and suites, which are between 30 and 156 sq m in size, are furnished with antiques from the house of the Princes of Hesse or in various styles from modern epochs. All have at least two telephones, fax and WiFi, movie channels in German and English, as well as barbells and a stepper exercise machine. With all this, you barely have to leave your room – especially since room service is available around the clock.
›› Westend-Süd, Friedrich-Ebert-Anlage 40, Tel. 7 54 00
www.hessischer-hof.de

Hotel Jumeirah Frankfurt
The globally renowned Jumeirah Group will open its first hotel in Germany in the Palais district in the heart of Frankfurt in spring 2011. The hotel will have more than 219 rooms on its 25 floors including several suites in three different categories, as well as two restaurants, a bar and three conference rooms. Guests will be able to pamper themselves on the top floor in an large high quality spa area.
›› Innenstadt, Palais Quartier, www.­palaisquartier.de, www.jumeirah.com

Hotel Savigny Frankfurt City
100 Euro and up
500 m away from the trade fair grounds and 200 m from the train station is the Savigny Frankfurt City in whose 155 comfortable rooms air conditioning, minibar, cable and pay TV, WiFi, a telephone and a bathroom with tub and shower are standard. The hotel also has an elegant restaurant, a comfortable bar and four meeting rooms. Services include a porter, laundry and ironing, a shoe shine machine and a baby-sitter on request.
›› Westend-Süd, Savigny Str. 14-16, Tel. 7 53 30
www.accorhotels.com

InterContinental Frankfurt
120 Euro and up
With 770 rooms and suites over 21 floors, the Interconti is one of the largest, and also best, hotels in the city. Especially from the top floors, you can enjoy a positively breathtaking view over the city or the Main. But it’s also worth taking a look at the interior of the elegantly furnished rooms. The well equipped fitness club and the business center are available to guests around the clock. The hotel also has two first-class restaurants, a bar that reflects the flair of the Frankfurt stock exchange, as well as 19 conference rooms with the latest conference equipment.
›› Bahnhofsviertel, Wilhelm-Leuschner-Str. 43, Tel. 2 60 50
www.frankfurt.intercontinental.com

Le Méridien Parkhotel
117 Euro and up
High-class traditional hotel near the main train station. It’s divided into two parts; the first is the business wing, with 220 rooms accentuated with maple and plasma televisions, while the other is the historic palace area, with its beautiful vaulted ceilings and 80 comfy art nouveau rooms. To increase your sense of well-being during your stay, you can go to the restaurant Le Parc, with its terrace, or the summer garden Le Jardin, the nostalgic Casablanca Bar or to the spa area, with sauna, steam bath and optional massages. In addition, 13 meeting rooms with the most up-to-date equipment are available for conferences and seminars.
›› Bahnhofsviertel, Wiesenhüttenplatz 28-38, Tel. 2 69 70
www.starwoodhotels.com

Maritim Hotel Frankfurt
110 Euro and up
The Maritim Sports Club on the top floor, with a pool, sauna, steam bath, solarium, up-to-date fitness equipment, plus a panoramic view of the Frankfurt skyline, make the Maritim a popular place to be not only for the hotel guests, but also for sports and fitness fans. The recently opened five star hotel also impresses with its 543 elegantly furnished rooms including 24 suites and seven modern conference rooms. The hotel also has three restaurants, including the award-winning SushiSho Japanese restaurant and the Life-Style Bar. The hotel is right next to the trade fair grounds and is mostly fully booked when a fair takes place.
›› Bockenheim, Theodor-Heuss-Allee 3, Tel. 7 57 80
www.maritim.de

Mövenpick Hotel Frankfurt City
155 Euro and up
This four-star branch of the international Swiss premium hotel chain opened near the Frankfurt trade fair grounds in 2006. It features 288 modernly equipped nonsmoking rooms – of which 242 are standard, 26 skyline and 15 are superior rooms, as well as 5 junior suites – a fitness center with solarium and a conference center with 12 rooms. Especially popular, not only among the hotel guests, is the Sunday brunch in the hotel restaurant.
›› Gallus, Den Haager Str. 5, Tel. 788 07 50
www.moevenpick-hotels.com

Rocco Forte Villa Kennedy
239 Euro and up
The five-star hotel, which opened in 2006, is on the south bank of the Main river in the middle of the elegant villa neighborhood of Sachsenhausen. It has 163 stylish rooms and suites that are equipped with all imaginable comforts, as well as a large spa area with a pool, fitness room, sauna, yoga and massage rooms. With nine meeting rooms and a 330 sq m ballroom with its own lobby, the Villa Kennedy also offers excellent equipment with the most modern equipment for conferences and events.
›› Sachsenhausen-Nord, Kennedyallee 70, Tel. 71 71 20
www.villakennedy.com

Roomers
148 Euro and up
Frankfurt’s newest designer hotel distinguishes itself by its dark-toned fittings and clear, elegant forms as well as by its central location between the central train station and the Main river. The 117 individually designed rooms and suites offer every comfort from free WiFi and flat-screen TV to air conditioning. The chic establishment also has a large spa area with an outdoor terrace and four meeting rooms for up to 25 people. The pleasant atmosphere on the patio allows guests to escape the city’s hustle and bustle.
›› Gutleutviertel, Gutleut Str. 85, Tel. 2 71 34 20
www.roomers.eu

Sheraton Congress Hotel Frankfurt
105 Euro and up
Large luxury hotel designed for business guests, near the Stadtwald forest and the airport. Each of the 396 comfortable rooms and suites has three telephones, a private answering machine and modem and ISDN connections directly on the desk; the Executive rooms and all the suites also have high-speed Internet access. But high demands are also satisfied outside the rooms. The hotel has three restaurants and a lounge bar, a conference center with 13 meeting rooms containing the latest technical equipment, as well as a pool with sauna and steam room.
›› Niederrad, Lyoner Str. 44-48, Tel. 6 63 30
www.sheratoncongressfrankfurt.com

Steigenberger Frankfurter Hof
290 Euro and up
Frankfurt’s premier address for more than 130 years, this traditional hotel has resided in a magnificent Renaissance building in the center of the city, spoiling both prominent and well-heeled guests. Behind the impressive exterior hide 321 high-class furnished rooms and suites equipped with the most up-to-date equipment, four restaurants and a bar, a fitness and spa area as well as 19 meeting rooms. This is supplemented by an extensive range of services, from secretarial and limousine services to shoe shining, luggage and butler services. Internationally award-winning luxury hotel.
›› Innenstadt, Kaiserplatz, Tel. 2 15 02
www.frankfurter-­hof.steigenberger.de

The Westin Grand Frankfurt
148 Euro and up
Elegant grand hotel located centrally in the city, with a famous lobby under a glass dome, 12 meeting rooms, a pool in Roman style, as well as five restaurants and a bar. The 371 rooms and suites, which are individually furnished in various styles, with elegant fabrics and luxurious materials, are equipped with all the technical refinements that you can think of. The marble bathrooms also have underfloor heating and an infrared heat lamp. The hotel was renovated in 2007 and its name changed from the Arabella­Sheraton Grand Hotel to The Westin Grand Frankfurt.
›› Innenstadt. Konrad-Adenauer-Str. 7, Tel. 2 98 10
www.westin.com