Party in the City 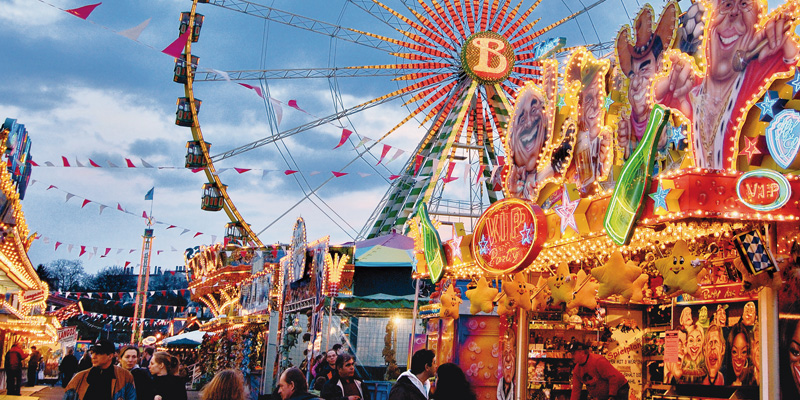 The year starts off in style in Frankfurt and the surrounding regions. Right after the tapping of the first cider of the season, the carnival parties and parades are already taking place, and are especially lively in nearby Mainz. The clown costumes have hardly been put back into the closet when the next events hit the Frankfurt scene, the spring festivals, the largest of which is the three-week long Frankfurt Spring "Dippemess" in April. After these warm-ups, the season really starts to get going. Partyhardy types could probably attend a different festival every day.

Festivals in historic locations are particularly popular, such as the Oberusel Fountain Fair or the Hoechst Castle Festival, both in June.
The Berger Street Festival – also in June – is a multicultural highlight, when the lower Berger Street in the Frankfurt district of Nordend-Ost transforms into a party mile for the weekend.
The Schweizer Straße (Swiss Street) Festival in Sachsenhausen-Nord is also one of the more popular street festivals.

Among the cultural open air events, the four-week Stoffel Theater Festival is a particularly popular attraction.
Every year thousands of thrilled visitors are attracted by the free offerings of music, theater, and cabaret performances in Günthersburg Park.
These are, however, of course small fish compared to the three million people who attend the Museum Shore Festival in only three days.
This cultural mega-event has been celebrated during the last week in August every year since 1987, and has become the largest public festival in the entire Rhein-Main region.

But the joie de vivre of Frankfurt is also emphasized at the Mainfest – with a funfair, live music and fireworks – which also takes place in August. Finally, the wine festival season begins in the late summer. Besides German wines from the nearby Rheingau region, the traditional beverage of Frankfurt, cider, is also imbibed, for example at the Stöffchefest on the Römerberg in September.

The year is then rung out at the idyllic Christmas festivals in Frankfurt or Wiesbaden, naturally with a mulled cider.
And after the New Year, it isn´t much longer until the first shouts of "Hey, you clowns!" are heard, and the event season starts up anew.