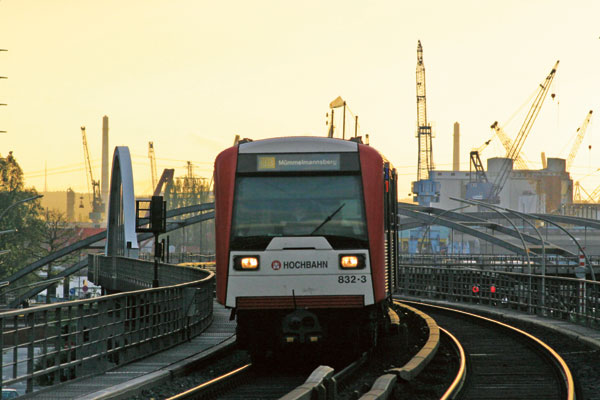 For ordinary mortals who don’t get chauffeured to work in a stretch limousine, luckily there’s public transport. In and around Hamburg, the public transportation system is made up of an extensive network of trains, buses and ferries. And no matter which means of transportation you use, one ticket is sufficient, as the 33 local transportation companies including the Hamburger Hoch­bahn and the S-Bahn Hamburg, are all members of the Hambur­ger Verkehrsverbund (HVV) integrated public transport association. In addition to greater Hamburg, the neighboring counties of Pinneberg, Segeberg, Stormarn, Herzogtum Lauenburg, Lüneburg, Harburg and Stade in Schleswig-Holstein and Niedersachsen are also part of the HVV area, which spans 8,600 square kilometers.

To make using the system as easy as possible for native Hamburg citizens and newcomers, there’s a large network of services and sales points at prominent locations as well as a telephone information hot line on 040/194 49, charged at local rates.
On an average working day, the HVV transports 2 million people to all parts of the network on more than 680 commuter and regional trains, buses and ferries. The heart of Hamburg’s public transportation system is the suburban railway network that connects all the parts of town.
If all the tracks had been laid in a straight line, they would go from Hamburg all the way to Munich, southern Germany.
The Hamburg network has more than 800 kilometers of tracks. And more are being added over the next couple of years. The long-awaited S1 airport train, which runs every 10 minutes, went into service in December 2008 and the new subway line U4 will run to Hafen­City starting in 2011. The HVV can offer another record, which no one can take away – it was founded in 1965 as the world’s first integrated public transport system.