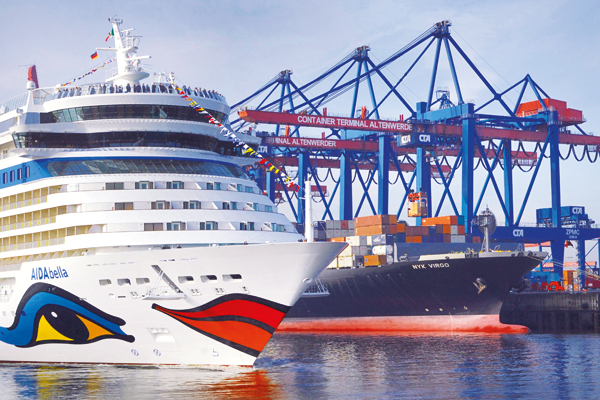 Hamburg had its best year to date for cruise ship visits in 2010. Over 100 cruise ships carrying more than 200,000 passengers dropped anchor at the Elbe river metropolis, including the Queen Mary 2, which paid four visits in total. And the numbers are projected to continue rising. It was obvious for a long time that HafenCity’s cruise terminal and its two berths could no longer cope with this onslaught alone, so work started in 2008 on a second cruise terminal in Hamburg-Altona at the Edgar-Engelhard quay, with the publicly owned Fische­reihafenentwicklungsgesellschaft as lead builder.

On August 15 2009, after the quay wall was completed, the AIDAcara ship paid an inaugural visit to the Altona terminal, where there is a provisional berth while work feverishly continues on a permanent terminal building. The glass structure will be eight meters high and will cover 2,000 sq m. It will be equipped with flood protection measures and won’t be 15.50 m higher than sea level so that it doesn’t block the view of the Elbe from the Altonaer Balcony. The building’s highlight will be a so-called “Farewell-Deck,” a walk-on roof where up to 1,500 sightseers can wave to the arriving and departing passengers of the mega-ships, which are up to 300 m long. When the € 30 million prestigious project is completed for the start of the cruise season in March 2011, Altona and its new cruise terminal will finally be on the international seafaring charts. And for the first time, cries of “Ship ahoy” will be heard in two cruise centers in Hamburg.