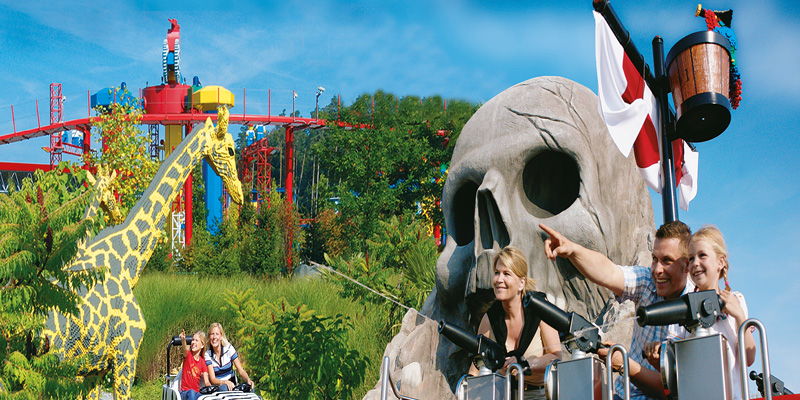 Embedded in this landscape – which is already spectacular on its own – many adventure parks and attractions for the whole family wait to be discovered. In Bad Tölz, for example, the longest (1286 m) summer toboggan run in Germany winds down the Blomberg mountain. And the German Legoland is located near Günzburg, only about 90 minutes by car from Munich. Furthermore, a special highlight for young and old alike is a visit to the Bavaria Filmstadt movie studios in Geiselgasteig in southern Munich. During a guided tour, visitors can view the original settings of various movies such as Das Boot, Asterix & Obelix and Vi­cky’s home town of Flake, including the original Viking ship from Michael Bully Herbig’s film Vicky the Viking. Besides experiencing a 4-D adventure theater with moving seats and a revolutionary sound system, visitors have also been able to visit “Bullyversum’’ since summer 2011. This is a unique movie experience world with original display items from Bully’s life and films.

The best leisure destinations for families at a glance

Allgäu Skyline Park
Popular leisure park with spectacular rides such as the 50-m upside-down roller coaster and the Sky Shot, in which the passengers are shot 90 m into the air within a ball. If you need to “relax,” you can board the. Also Ferris wheel, chairoplane, petting zoo and water-based playground.
›› 86825 Bad Wörishofen, Im Hartfeld 1, Tel. 0 18 05/884 880, www.skylinepark.de
›› Anreise: A 96 Richtung Lindau, Ausfahrt Bad Wörishofen, 2nd exit at the roundabout, then follow the street running parallel to the highway.
›› April-Oct

Bavaria Filmstadt
Europe’s largest and most successful movie and television studios in southern Munich are open to the public. The 90-minute guided tours through the sets of Asterix and Obelix and Das Boot are as fascinating as a look at the original sets and props from Michael Bully Herbig’s film Vicky the Viking. Since summer 2011, visitors have been able to immerse themselves in “Bullyversum,’’ a 2,000 sq m themed attraction celebrating the life and work of Germany’s most successful filmmaker.
›› 82031 Geiselgasteig, Bavariafilmplatz 7, Tel. 64 99 20 00, www.filmstadt.de
›› Getting there: Tram 25 to Grünwald, stop: Bavariafilmplatz
›› April-Nov 9.00-16.00, Nov-März 10.00-15.00

Blombergbahn
Germany’s longest summer sled run (1,226 m, 220 m height difference) with an amusement park for kids, including a petting zoo, trampoline and children’s go-karts. From Blomberg you have an awesome view over the Alps; chair lift.
›› Getting there: A95 to Garmisch-Partenkirchen, exit Penzberg/Bad Tölz. Blombergbahn directly on B472, www.blombergbahn.de

Circus Krone
Circus Krone, the largest circus in Europe, which celebrates its 100th anniversary in 2012, stages performances in its own big top December to March. When the circus travels around Europe in the summer, a wide range of other events take place in the tent.
›› Maxvorstadt, Zirkus-Krone-Str. 1-6, Tel. 5 45 80 00, www.circus-krone.de

Märchenwald Isartal
Lovingly laid-out leisure park in which more than 260 moving figures activated at the press of a button tell over 20 fairy tales, either in German or English. There are also many other attractions, such as roller coasters, carousels, a horse-riding track and a “slide paradise.”
›› E3, 82515 Wolfratshausen, Kräuterstr. 39, Tel. 0 81 71/­38 55 838, www.maerchenwald-isartal.de ›› Getting there: A95 to Garmisch-Partenkirchen, exit Wolfratshausen
›› April-Oct

Salzzeitreise Berchtesgaden
A unique expedition: You ride the mine railway about 650 meters deep into the interior of the mountain to the sparkling salt cathedral, then continue via slides through dark tunnels, through the vault of a shut-down leaching area and past a colorful salt grotto. There is also a raft ride over the subterranean salt lake. In addition, a salt museum shows old mining lamps, tools and devices used in mining.
›› 83471 Berchtesgaden, Bergwerkstr. 83, Tel. 0 86 52/6 00 20, www.salzwelt.de
›› Getting there: A8 direction Salzburg, exit Bad Reichenhall, B 305 to Berchtesgaden

Sealife München
Here, a journey into the underworld begins at the source of the Isar and follows the course of the water right to the Black Sea and even further into the ocean depths. Over 8,000 creatures throng in more than 30 pools including Gonzales, Bavaria’s only ocean turtle.
›› Milbertshofen, Willi-Daume-Platz 1 (Olympiapark), Tel. 0 18 05/6 66 901 01, www.sealife.de

Tierpark Hellabrunn
Munich’s zoo is located amid the Isar meadows with a primate house, petting zoo, walk-in bird cage, aquarium and many other highlights. More than 17,000 animals live in the zoo, which places animals in enclosures according to their geographical homes. Daily feeding and attractions such as the Elephant Patrol.
›› Harlaching, Tierparkstr. 30, Tel. 62 50 80, April-Sept. 8.00-18.00, Okt-March 9.00-17.00, www.tierpark-hellabrunn.de

Westernstadt Pullman City
This large park in the Bavarian Forest has been recreating American history since 1997. Attractions for old and young include a Wild West railway, an adventure playground, a history show with real buffaloes and a Native Indian museum.
›› 94535 Eging am See, Ruberting 30, Tel. 0 85 44/9 74 90, www.pullmancity.de
›› Getting there: A 92 to Landshut/Deggendorf, A3 to Passau, exit Eging am See
›› April-Oct, 10.00-01.00